Zen Wistaria (ゼン・ウィスタリア; Zen Wisutaria) is the deuteragonist to Shirayuki's protagonist in the Akagami no Shirayuki-hime manga and anime series.

When he first met Shirayuki he was the second prince of the Clarines Kingdom, though he was hiding his status at the time. His older brother, Izana Wistaria, is the crown prince and later King of Clarines. Zen is an adventurous person with a light-hearted personality and a distaste for much of the formality his status causes him to be surrounded with almost constantly. In the past he was treated as a pawn and potential leverage against his brother,and targeted for assassination due to his royal status and developed issues trusting people. His studies and position also caused him to feel that it was impossible for him to truly have friends and become close to people, though Mitsuhide was able to dissuade him of the notion that he could never have friends. Zen became much more open after meeting, befriending and falling in love with Shirayuki. He is currently in a romantic relationship with Shirayuki and has stated that he intends to propose to her, though he has not yet discussed this with Shirayuki and their different statuses would make a marriage between them very controversial.

He keeps his two aides, Mitsuhide Rouen and Kiki Seiran at his side, and they had already been his near-constant companions and dearest friends for five years by the time he met Shirayuki to the point that Izana and Queen Haruto note that he won't even speak with his family without at least Mitsuhide present. After Obi placed himself under Zen's care and Zen grew fond of him Zen claimed hold of the "reins" that keep Obi in his presence, letting the former outlaw know that Zen doesn't intend to let him slip back into obscurity. After Obi proved his loyalty and friendship to the prince many times over Zen knighted him as his personal knight, making Obi a member of the Royal Knight Circle despite not having gone through the years of training most members, such as Kiki and Mitsuhide, had to go through before being knighted.

Zen's medium length hair is silver-blonde (white in the anime) with fringes long enough to pass his eyebrows. It is shorter beneath his ears and longer up top and has been styled in slight variations of the same cut ever since he was a toddler. His eyes are a crystal blue that has been both jokingly and more seriously described as pretty by Obi. Shirayuki has also commented on the beauty of his eyes.

The prince is of average height, but Mitsuhide gives him a hard time for it at times because he himself and most of the other men Zen spends his time around are taller than the prince. When he is not on duty as a prince he is seen in casual but well-tailored clothes which normally consist of a dark top and light-colored pants. When he is inside the castle or otherwise tending to his royal duties, he is seen wearing more appropriate clothing for a prince with the royal crest on his belongings. His sword and glove are always seen on him whether he is sneaking out or attending to his duties. His 'royal blue' glove is always on his left hand and it covers his palm and middle finger.

His type of personality is easy going and is a person who is easy to get along with. He's responsible for his castle as the second prince of Clarines. He cares for all of his servants and aides who he sees as his friends and shows respect towards them. He especially cares for Shirayuki since the time he has met her, going great lengths to rescue her when she is kidnapped. Though he sneaks out of the castle, delaying his work, he treats his title as a prince seriously and cares deeply for his country. As Shirayuki stated, he always thinks about his position as a prince and what he can do for his country. He is not one to become extremely angry or sad, though when it comes to any of his friends, he becomes incredibly serious. He keeps his composure most of the time but at times when he is with Shirayuki, he can easily become embarrassed and even slightly jealous, mentioning that it was normal for her to work with young guys. He has taken a love for the forest close to his kingdom because it is a place where he can escape to and just be himself, not a prince. Though, while talking to Shirayuki about why he goes to the forest a lot he says, "But it's different now since you're here that's all I need." Overall, he has a very respectable, trustworthy, reliable and friendly personality. He can also be very serious at times.

When Zen was 13, Mitsuhide was appointed his aide by Izana who by then pointed out that Zen was going through a rebellious phase. At first Zen hated the idea of someone following him around. He was reluctant to tell him anything and ran off somewhere out of Mitsuhide’s presence. When Zen was around other people alongside Mitsuhide he replaced his angry and reluctant personality with a kind and warm one. He even went as far as introducing Mitsuhide and saying that he is happy that he was appointed one of his close companions; however, this was just an act to get Mitsuhide to escort Mikage to Izana. After that Zen ran off to meet with his only friend at the time, Atri. After an exchange of words and Zen explaining his situation, Mitsuhide started calling for him. He then tells Mitsuhide that he will only be an assistant to him, and Mitsuhide responded by asking him to refrain from using such cold words to which Zen apologizes for. Zen is then trained by Mitsuhide in sword fighting though Zen is reluctant to as he cannot beat Mitsuhide.

Zen later meets up with Atri. Atri tells him that they cannot meet up in the day anymore as he will be working at night to which Zen says he will still sneak up to meet up with him. When Zen next sneaks out he finds a wounded Atri. Rushing to him, he questions him as to where he got the wound from; but then a group of men appear behind them and slap Zen to the side. Mitsuhide then comes rushing to his aide as well as Izana. Zen then questions Atri and asks him if he is a traitor to which he confirms. He reveals that he was just friends with him to better a grudge. He shoots an arrow at Zen, however, Mitsuhide cuts the arrow before Atri can release it.

In the end, Mitsuhide ends their battle by fatally slashing Atri. As Atri is dying he says to Zen that it would have been better if he wasn't a prince. Atri's death leaves Zen emotionally distraught and he is comforted by Mitsuhide, which solidifies their beginning friendship. A month later Mitsuhide and Zen discuss the events that happened, revealing that Zen has grown up a little due to this experience—however, he still retains his general positivism. Mitsuhide then goes on to ask Zen to allow him to protect him, which Zen accepts.

"Color has meaning, and red is supposed to represent fate. You may not like it much now, but your red might lead to something good when you least expect it." —Zen complimenting Shirayuki.

"I too wish for you be by my side. I vow on our meeting that I will protect both your and my wish with everything I have. I know it might sound strange to ask for your help to keep that promise...but it's undeniable you always give me strength. Therefore, will you take my hand?" —Zen telling Shirayuki his feelings.

"It's up to her to forgive you for that. I see no reason to hold it against you now." —Zen telling Obi to be Shirayuki's bodyguard.

"Shirayuki... I think that the most charming part about Obi is how, even if someone suddenly invades his room, he'll still give up his bed for them." —To Shirayuki (Chapter 89) 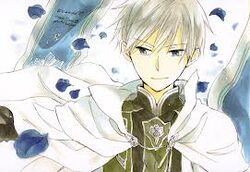 Retrieved from "https://akagaminoshirayukihime.fandom.com/wiki/Zen_Wistaria?oldid=16180"
Community content is available under CC-BY-SA unless otherwise noted.