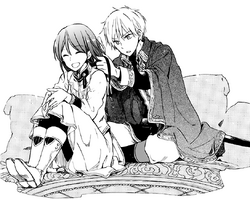 Zen's relationship with Shirayuki began when he stumbled upon her in a forest while he was sneaking away from the castle. He was leaping over a wall she was leaning against on the far side and her unexpected appearance distracted him to landing wrong and injuring his arm. He questions why she is in the forest, and she asks to treat his wound. In his caution of her he informs her he can't be sure she's not a suspicious individual who wishes to harm him, suggesting the "medicine" might be poison. Upon hearing this Shirayuki is struck by Zen's rudeness, but nevertheless harms her own arm with Zen’s scabbard and uses the medicine she was going to put on his wound saying, "It's not my hobby to carry poisons around with me”. Chastened, Zen laughs as his opinion of her completely changes and he gladly accepts the offer of her treating his wound.

After Shirayuki moves to Clarines, Zen spends more and more time with her and comes to greatly respect Shirayuki's dedication and responsibility, as well as her positive outlook on life, which inspires him to work harder. Meanwhile, Shirayuki thinks very highly of him too, as he represents what a good prince should be. As time went on, they began to fall in love with each other and he eventually admitted he was in love with Shirayuki.

Zen was the first person to convey his feelings as he kissed her unexpectedly while they were talking alone. Though both are extremely embarrassed, Zen tells Shirayuki that the next time he felt such an impulse he would ask her consent before acting on it and intended to be sure of her feelings on the matter before tying anything further. Later, he tells Mitsuhide that he has held feelings for Shirayuki for a long time. Shortly afterwards Shirayuki makes her own feelings clear. Zen then asked her if she would take his hand as his significant other, and she says yes. Their status as boyfriend and girlfriend is not yet public knowledge.

Zen's older brother and the king of Clarines. Zen's relationship with his older brother is complex, but it is clear that he greatly respects Izana. As a child, Zen looked up to Izana and wished to be like him, but has since become aware of Izana's manipulative and mocking personality, which strains their relationship. While he respects Izana's ability to rule, Zen prefers respectful, open discussion and honest proceedings, as opposed to his brother's style of pulling the strings behind the scenes. As Shirayuki comes to hold a bigger part of Zen's life, Izana's meddling in their relationship frustrates him. While Zen openly admired his brother as a child, his current interactions with Izana are very formal in nature.

However, ever since Izana started to acknowledge Shirayuki, the relationship between Zen and Izana is not as distant as it used to be.

Zen's mother and queen dowager of Clarines. She cares for both her sons even if she can't see them very often. Haruto is completely different from Izana. She comes across as an easy-going, impulsive and cheerful but she get serious when she needs to be, and Zen's comments imply she's just as cunning and just as much of a meticulous planner as her elder son despite their very different dispositions.

Mitsuhide is Zen's close aid and his best friend. Although they took some time to warm up to each other, they trust each other a lot now. Mitsuhide is said to be the only person Zen listens to.

It was shown in the anime that at first, When Zen first met Mitsuhide, Zen acted cold around Mitsuhide and not listening to a single word he said. Whenever Mitsuhide expressed his worry for Zen, Zen always brushed it off by saying that Mitsuhide have no need to look after him as he knew that Mitsuhide wanted to be Izana's aide. Mitsuhide couldn't denied what Zen has just said but instead of giving excuse to him, Mitsuhide insisted on serving him as Mitsuhide claimed that it was his duty now that he is Zen's aide. Zen was shocked at that and called Mitsuhide weird but he started to warm up to Mitsuhide ever since that day.

They only started to become close after the death of Zen's friend Atri, who betrayed Zen and was in turn killed by Mitsuhide. Following Atri's death Mitsuhide remained calm and understanding of Zen's position, and his patience with Zen coming to terms with what had happened was the key to Zen learning to trust in others again.

Kiki is another aide and best friend of Zen. Kiki was originally one of the candidates that were suggested to be Zen's consort since she was the first daughter of a noble family, Seiran House. However, she refused to be the fiancee of the second prince and instead she went against her father's order and became the second prince's aide. She worked for Zen for 6 years and shows loyalty towards Zen as well as respecting him a lot. She seems to be an expert at playing chess, since she defeats Zen and Mitsuhide many times. Kiki also help Zen a lot to get Zen and Shirayuki together. She asks whether he wants Shirayuki to be his consort.

After being captured for threatening Shirayuki, Obi proclaims himself as Zen's servant, calling him "Master". Zen is initially unhappy about this arrangement, being understandably mistrustful of him but knowing he can't do much about it without pursuing charges against Obi's former employer Haruka and causing turmoil among the nobles. Zen eventually comes to trust him greatly, to a level that he will leave Shirayuki in Obi's protection when he cannot be by her side despite knowing the fact that Obi also developed a feelings towards Shirayuki. When Obi repeated that he has feelings for Shirayuki when Zen puts Shirayuki in his care, Zen answered him that it was all the more reason he would put Shirayuki under his care because he knew that Obi would protect Shirayuki with all his life. He is still occasionally exasperated by Obi since he enjoys teasing Zen.

While Hisame and Zen have not always had a positive personal relationship, and Zen is still often unsure of how to approach or react to the sly knight, Hisame is unquestionably loyal to Zen, far more so than he is to his own family. Said loyalty is one of the only certain things which can be said for Hisame as he plays things close to the chest and usually deflects serious inquiries with sarcasm, false politeness and occasional outright cruelty.

Shikito is a soldier in the Royal Guard of Wistal. He is not known to have known Zen personally before the test of the kingdom's new messenger birds but following the loyalty to Zen he showed during the test he and Zen became trusting, if sometimes distant, friends.

Atri was a young archer in Wistal whom Zen began to befriend as a youth due to their close ages. While they were never truly close he they spent a lot of time together and even after Atri betrayed Zen to the Lido rebels Zen considered him to have been a friend, however distant, for most of their relationship prior to his attempt to kill the prince.

Sir Tariga Bergatt is the younger twin of the current head of House Bergatt, who is a bit more open, friendly impulsive than his twin brother. He started looking up to Zen and couldn't understand why Tsuruba was still wanting to hide things from the prince after the two of them had decided to start moving against their corrupt and murderous eldest sibling.

Lord Tsuruba Bergatt, Viscount, is the current head of the Bergatt family and an ally to Prince Zen in the Wirant district. He fears his support is more of a burden than a boon given his family's fractured infighting and politics of other nobles in the region.

Higata is the only other applicant from the same Royal Pharmacy testing period as Shirayuki to pass the exam. While the young pharmacist is unsettled by the prince's disregard for the social difference expected between people of their differing status Zen has come to see him in a favorable and familiar light and seems to be quite amused by how Higata becomes a bundle of nerves whenever Zen addresses him casually.

Lord Touka Bergatt, former Earl, is a cruel, murderous selfish man who sought to make Zen vulnerable and then insert those loyal to himself to either manipulate the prince in order to regain those of his family's lands which had been turned over to the Arleons or kill the prince outright should he see through his plot.

Blaker is an arrogant self centered man who acts against the prince thinking his recently inherited title will allow him to get away with his behavior.

The head of the Tohz family and a loyal vassal to Touka Bergatt.

The knighted eldest son of the Head of the Tohz Family who was one of the biggest players and key planners in Touka's plan to manipulate, or failing that assassinate, Zen.

The now deposed former lord of the Rid territory and head of the Lido/Rid family. His allies attempted a coupe on the royal family and Atri's actions of getting Zen to lower his guard and go to a secluded place without alerting anyone and while avoiding his own guards was a part of this rebellion.

The pirate captain/commodore of the The Sea's Talon who kidnapped Shirayuki and fought Zen in Tanbarun.

Retrieved from "https://akagaminoshirayukihime.fandom.com/wiki/Zen_Wistaria/Relationships?oldid=16111"
Community content is available under CC-BY-SA unless otherwise noted.